The following is the second of a two-part book review installment by current SUMA student, Zach Zill.  Complimentary in topic to the review in Part I of William Cronon’s book Nature’s Metropolis, the following covers Adam Rome’s book, Bulldozer in the Countryside; which chronicles the massive expansion of post-World War II suburban tract housing development. Both books uncover a rich history of philosophical debate about humanity’s relationship to the natural world, and show how past efforts to improve that relationship have explicitly questioned the basic forms of property and ownership at the root of our legal and economic structures.

Bulldozer in the Countryside covers a more recent and less geographically-specific story. Rome chronicles how mass-produced, energy-inefficient tract housing became the solution for the U.S. housing shortage that existed at the end of the second World War. The results: runaway energy usage due to the abandonment of traditional, climate-specific house designs; poisoning of soil and water from widespread and inappropriate usage of septic tanks; and destruction of critical habitat and protective ecosystems that left both human settlements and other species’ homes more vulnerable to environmental threats. Like Nature’s Metropolis, this is the tale of intensive market expansion leading to extreme ecological consequences. Rome argues that “the postwar building boom was an environmental catastrophe on the scale of the Dust Bowl.” 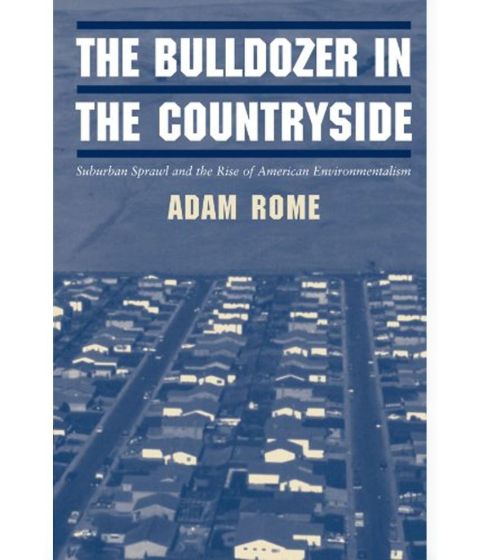 Rome’s account demonstrates clearly how the unchecked growth of the housing market left human communities decidedly less resilient and created wasteful patterns of land and resource use that are still with us today. When the environmental costs of suburban development began to be understood and mitigated, this process arose in opposition to market players, and in most cases was led and directed by ordinary citizens as well as by local and national government. Bulldozer in the Countryside will fascinate anyone interested in ecology, urban planning, or the building or energy industries. Of particular note is the discussion of the small group of postwar advocates for solar-powered homes. This group, animated by a spirit of resource conservation that had held sway during the war, ultimately lost out to a coalition of builders, electric utilities, and appliance manufacturers like General Electric who stood to profit from mass consumption of fossil fuel-based power and electricity-hogging consumer goods.

As with Cronon, technological change figures into Rome’s account, as mass production in homebuilding, facilitated by the “use of new earth-moving equipment” is a critical element of the story. Additionally, Rome shows how the spread of electric-powered domestic appliances shaped consumption patterns in suburban developments. Yet, like Cronon, Rome shows that it was not the mere existence of new technology that drove environmental change, but the ability of that technology to be harnessed in pursuit of market-based imperatives. Crucially, Rome shows that it was not consumer demand, but builders’ and manufacturers’ decisions to build electric appliances into every new home, that drove patterns of rising electricity use.

Rome discusses the advent of grassroots campaigns to stop, or at least slow, the ecological destruction caused by suburban development. Federal agencies responded to such calls by undertaking the first large-scale scientific studies of the ecological impacts of human settlement. The earliest hydrology studies carried out by the federal Geological Survey; studies of large-scale sediment erosion and its impacts on water quality by the Soil Conservation Service; and the first widespread efforts to preserve wildlife habitat in cities and suburbs by the Fish and Wildlife Service, all laid the groundwork for many of today’s sustainability fields. The work of these three agencies taken together also “emboldened activists and policy-makers” and “helped to make possible a new kind of town building.”

These efforts came close to enshrining in policy the position espoused by the great ecologist Aldo Leopold: the need for a “land ethic” to govern human relationships with the natural world. These policy efforts came in the form of land-use regulation that “challenged the traditional understanding of the rights of property ownership” and placed restrictions on the market in real estate development. The success of these attempts can be seen in our current systems of zoning, building permit reviews, and environmental impact reports. Yet the most far-reaching efforts never became law. The National Land Use Policy Act, passed overwhelmingly by the U.S. Senate in 1972 and 1973, never made it through the House of Representatives.

The philosophical debates that arose over the National Land Use Policy Act have an echo in today’s attempts to manage the social impacts of greenhouse gas emissions into our shared atmosphere. Rome quotes legal expert Joseph Sax in the Yale Law Journal of 1971:

Property does not exist in isolation. Particular parcels are tied to one another in complex ways… one parcel of land is inextricably intertwined with other parcels, and causes and effects flow across artificially imposed divisions in the land without regard for legal boundaries. The land simply cannot be neatly divided into mine and yours.

The dominant response to today’s environmental challenges has been to create even more “artificially imposed divisions” in the form of credit-based carbon markets, and even stormwater markets in cities like Washington, D.C. and Philadelphia. Rather than pull back from a commitment to commodification of natural goods, I worry that we are deepening that commitment.

In many ways, the challenge of our time is how to solve the problems created during the historical eras described in these two books. Destructive patterns of development and resource-use became woven into our economy in the twentieth century, and we are just now coming to terms with the efforts required to untangle the knot. It is vital that we take an honest look at the systems and practices that have contributed to the problem. In the past, some of the greatest moments of market success have also been the greatest moments of environmental failure. While we are told today that markets will save us, I wonder if/how can we truly escape the hole we’re in by digging deeper?

In crawling our way towards a more sound method of living on, and with, our planet, we must study the history of how we got here. Despite the creativity required of sustainability practitioners, we rarely question the pro-market platitudes that dominate nearly every sphere of professional discourse today. Both Nature’s Metropolis and Bulldozer in the Countryside shed crucial light on our situation and bring a critical eye to the vital, but often hidden links between the market, the places we live and work, and the processes of environmental degradation. These books are critical reading for any student or practitioner working in sustainability today.

*Trendster is a voluntary, crowd-sourced initiative facilitated by SUMA Net Impact. It does not represent the collective views of Columbia University, the Earth Institute or Net Impact

View all posts by ibrechersuma